Winner of the OSPA 2013 Composition Competition 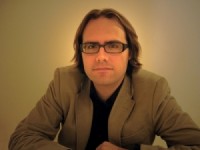 The score of «Resonances for Orchestra» by Marcos Fernández was the winning piece of the 2013 OSPA Composition Contest and will open next season 2013/2014 of the Asturias Symphony Orchestra. Its creator describes the piece as «an intimate work where I use the resources of the orchestra in search of exotic colors and textures instead of sound density. «

Marcos Fernandez commented at the end of the contest he considered «a great experience to have worked with the orchestra and the conductor Rossen Milanov, they were very receptive and splendid since the first rehearsal.»

The composer recalled that in the past had worked in Oviedo as resident composer for Cre.Art Project during the production of «Noctum» and have been fortunate to come back to this city to receive a premiere; this reflects a creative city willing to do new and original things despite the current difficult times in Spain «.

His music has been reviwed by critics as «coloristic, fascinating, accessible and interesting in the fusion of different art forms.» His musical style has been heavily influenced by Celtic folklore and today is enriched of new musical languages and other trends such as flamenco, jazz, pop and film music.